I was driving quickly to The Bible Society to buy some Sesotho copies of the book of John for Matthew to pass out after the Jesus Film was over for this Saturday’s bible study where over 40 boys were participating. The Lord has been doing some AMAZING things here lately and we are just humbled and in awe to be part of His work! 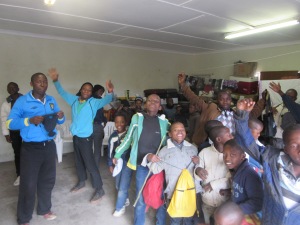 So there I was, driving with my daughter in the back seat of the car. He signaled for me to pull over, and I could see the delight in his eyes. Maybe he won’t even ask for my license I think and I’ll be on my way. I greeted him in Sesotho, and his delight increased. We made small talk. Then he asked for my license. No, not Washington DC. Then he starts talking about how he wants to “treat me”, and something about his wife and my husband. I’m assuming he’s asking for a double date. I smile and friendly old me exclaims how that would be nice, blah blah blah. I’m so stupid. He wants to know how this can happen, so I think, how can I put him in contact with my husband, but not really because we don’t really want to hang out with this random guy. So I jokingly say, “Well, when I get home, I’ll tell my husband to come over here and you can pull him over and talk to him.” And with his next statement I realize what it is he is actually saying. “No ‘M’e” he says, “your husband must not know. We must cheat in private.” I’m thinking, wait what? ohhhh, CHEAT. Not treat. Oh dear. You are so stupid. Now what are you going to do? How can this be happening?

I reach for my license but he pulls it back. A buddy of his walks by and pats him on the back, as if congratulating him. And so I had a choice. To turn into an American Woman, demanding my rights and giving him the attitude he deserves. Or I could explain to him where I stood on him being a pig…I mean, on remaining faithful to my husband. So I chose the latter. I explained to him that no, I wasn’t ever going to, nor had I ever cheated on my husband. There was nothing he was going to say that was going to change my mind. I also was a bit cautious to not upset him because I don’t know the law here and didn’t want to give him a reason to take me downtown. I was just trying to get out of the situation with calm waters. So I kept smiling. But don’t smile too much, oh gosh. He could not accept my reasoning and pointed flippantly to his ring as well, explaining that it means nothing to him. In this terrible situation I explained that in fact my ring meant something and I would willingly remain faithful to my husband, who happened to be a pilot, until the day that I died. Pilots are so much cooler than cops anyways. =)

“Are you refusing my offer?” He asks, holding my license out of reach. “You know I am a police officer, right? Don’t you want a police man?” At this point I firmly stated that yes I was, and no I don’t. I took my license from his hand drive away.

Anger and tear flooded out of me. “Mommy, sad?” Chloe asked from the back seat. I felt so stupid. How could I have not known what he was really asking from me? How could I have been so nice? I felt so violated. It took me back to numerous times when I was younger when I felt invaluable and worthless, when I didn’t know how to say no, or when I lead people on with no intentions of following through and when I couldn’t walk away.

“You are not that girl anymore Precious Daughter. You are mine. I choose you. I value you and you are deeply loved, and I am protecting you,” I heard The Lord whisper.

I have been fighting anxiety these past few weeks. Body shaking, head pounding anxiety. It’s like I’m trying to do good, and the enemy is doing everything he can to steal my joy. I’m on the front lines of the battle field. I am worn down. My body is betraying me, but I am a fighter. I’m smart enough to know now, that these feelings are because the enemy is feeling threatened and he is trying to stop me. Praise God that He can use me for any good. I am so weak on my own. The stakes are much higher when the battle field is closer and more personal. I am aware that as my husband and I serve The Lord it comes with a coast. But I ask myself, would I rather have peace and comfort or would I rather follow where He leads me? And so I limp along. Heart breaking.

I heard a story of a wise woman this last week in our Pricilla Shire study of Gideon, and she said, “don’t cry for me, for my pain and loss, BECAUSE THE LORD MET ME THERE.” And so I hear Him say, “press on.”

“I have said these things to you, that in me you may have peace. In the world you will have tribulation.

I live in a culture where marriage is not valued or respected. Cheating here is expected. Expected. I have heard of stories of girls in high school who view contracting HIV/AIDS as inevitable, and see it as just part of life. My friend tell me that there is such apathy from the girls. That they think that the odds of finding a spouse who is negative is about fifty/fifty, and that they will most likely cheat on them at some point, most likely contracting the disease from their girlfriend, so then what is the point of going to great caution to avoid it themselves.

I’ve been told kids think that if you’ve been circumcised that you can’t catch the virus, or if you use two condoms it will protect you, which we all know is not true. Sigh.

I have heard that the official stats of 25% of the population being infected with HIV/AIDS is actually more like 50%. That 25% is only REPORTED cases. That’s people who have money to be tested and on medication from the government. Here it is actually illegal to put down HIV/AIDS as the cause of death, you instead have to put down the sickness which lead to death, like TB or something like that. Heart breaking.

I’ve heard the lies that exist in a culture where education and open conversations about medical stuff is quiet. I’ve heard that if you have sex when you are pregnant or nursing that the sperm will actually make your child mentally retarded. And in addition it is very normal for new moms to go live with their family for up to two years after a baby is born for help and to recover. Sooo, we’re looking at 9 months, plus up to 2 years where people thing they shouldn’t be having sex. I’ve been told it is assumed that during this time the man will “do what he needs to do.” Heart breaking.

Marriage is about so much more than just our needs and making ourselves happy. We can explain that because of God’s faithful love for us, we are a living representation of his love. I am reminded that just me living my life, the way I treat my husband and the way I conduct myself with other men, that I am living the Gospel. Long after the butterflies are gone, and the stretch marks and saggs have arrived, we remain faithful to each other because our marriage is an outward symbol of God’s unconditional love and forgiveness and faithfulness to His people. Don’t get me wrong, I think my husband is the sexiest man on the planet and I love him more today than when I met him 8 years ago…but, it’s not about us. These young boys are watching me, and wondering possibly what my motivation is for inviting them into my home. It is a joy to know that I am pointing them to Jesus through my faithful marriage.

So, will you join me in PRAYING for:

-For the truth to reign in the marriages in this culture. For people to remain true.

-For mMy heart to remain soft but wise

– For the devastating effects these lies are having on the community, especially the children.

– For the marriages of the missionaries here in Lesotho, that they would be bound together.

– For the mothers who are raped who have to choose between an abortion, nursing their child and risking transferring the AIDS/HIV virus to their newborn because they are too poor to afford formula, or abandoning their newborns in garbage bags in the streets.

– Pray for the younger generations to choose abstinence and loyalty in their marriages.

– Pray for the TRUTH and for Christ’s love and forgiveness to wash over this place.